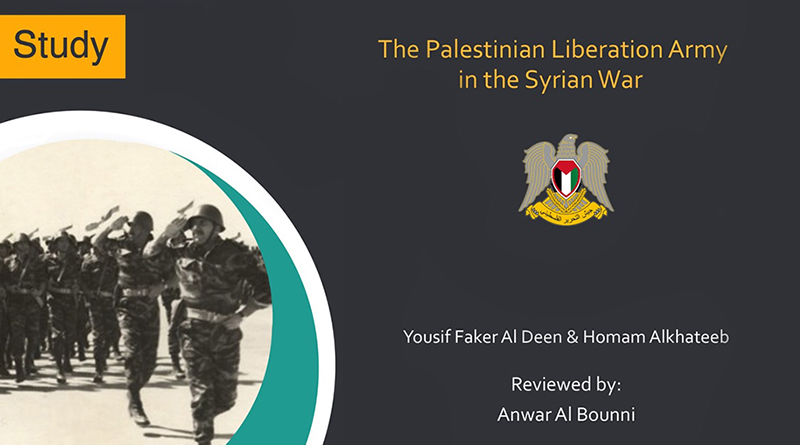 Palestinians refugees suffered a great harm during the war in Syria. The Yarmouk Camp, Huseiniyeh Camp, Daraa Camp and Handarat Camp were largely damaged by the Russian – Iranian – Syrian coalition, while other camps were differently affected. Ignited by revenge, Syrian authorities arrested 1,693 Palestinians, all of whom are now enforced disappeared. 556 others were killed under torture, and 3,871 Palestinians were killed during the fighting and military operations and battles. UNRWA has estimated that 120,000 Palestinian refugees fled the country during the war, while we think there are approximately more than 146,000.

The pro-regime Palestinian forces, however, continued to defend the Syrian regime, ignoring the voices of the Palestinians. The Palestinian Liberation Army (hereafter, PLA) is one of the most prominent forces that supported and still supports the regime. This study sets forth a holistic presentation of the PLA’s establishment; it delineates how its participation in the Syrian war is unlawful and stands exactly against its legitimacy; and it explores the Syrian regime strategies that were being used to engage PLA in the war. We explore how The Syrian regime attempted to bypass traditional and expected resistance by making the PLA take part in a war outside of its legitimate-based existence.

In doing so, this study follows the gradual engagement of the PLA in the Syrian war, and draws a map of its participation in the war around the Syrian provinces, in addition to the human rights abuses committed by its members.

This study will adopt a descriptive-analytical methodology using the documenting technique by analyzing documents, official papers, and other types of secondary data, such as news, articles, studies, and so on. Additionally, this study will use the data collected from observations conducted by the researchers. The data were analyzed qualitatively later, through workshops held by the researchers.

This study contributes to the human rights reports, and political studies and reports, by showing and proving how the role played by the PLA is against its legitimacy. It will help to determine the legal issues that are relevant to the war criminals and to design a collection of documents and data that could be useful for further studies to come.

PLA in the Syrian War22