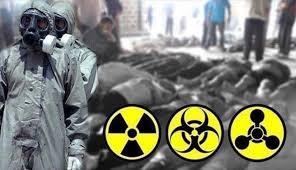 On May 28th, 2018, the U.N.’s Conference on Disarmament will be held in Geneva over four weeks, until June 24th. The goal of this conference is to promote weapon of mass destruction disarmament and arms control.
Despite allegedly carrying out numerous deadly chemical weapons attacks, Syria will take over the presidency of the UN’s Conference on Disarmament as a result of an automatic rotation between member states. This appears to be a step towards restoring the legality of the Syrian regime. A regime accused of committing crimes against humanity, genocides against Syrian people, and using prohibited weapon, including dozens of attacks with chemical weapons. A regime that is responsible for the death of more than 300000 civilians including children, women and elderlies.
The signatory organisations strongly condemn this mandate and call upon the international community to reverse this decision. We appeal to the European Union, United Kingdom and United States of America to boycott this conference because it represents an insult to human values and an appreciation medal to a war criminal.
Moreover, we hope that the international community will organize an international conference and pressure the Security Council to set up an international tribunal to investigate war crimes committed in Syria by different parties involved in the conflict, primarily those committed by Syrian regime.
Signatory organization
• Adel Center for Human Rights
• Alkawakbi Organization for human rights
• Democratic republic studies Center
• Fraternity Foundation for Human Rights-Birati
• Gav for releif and development
• Kurdish Committee for Human Rights- Observer

• Syrian Center for Statistics and Research