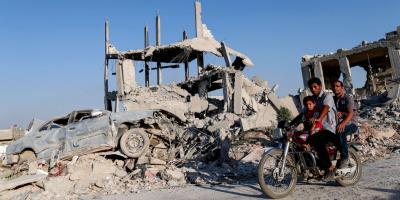 Joint Statement/ Syria: Strengthening UN action towards ensuring accountability for war crimes and crimes against humanity in Syria
September 20th, 2017
We, the undersigned non-governmental organizations, address collectively our calls to the international community to adhere to protect civilians across Syria and take concrete action to hold all perpetrators of blatant human rights violations accountable. On the margin of the presentation of the 14th Report of the Commission of Inquiry on the Syrian Arab Republic (CoI) during the 36th session of the Human Rights Council in Geneva, we jointly ask for the immediate referral of the information gathered by the CoI to the JIM, the UN Security Council (UNSC), the UN General Assembly, with a view to ensuring accountability for these crimes.
The CoI’s findings on the systematic use of chemical weapons perpetrated by governmental forces primarily targeting civilians should not be taken lightly and should be considered a red line by all. The report states that “Between March 2013 and March 2017, the Commission documented 25 incidents of chemical weapons use in the Syrian Arab Republic, of which 20 were perpetrated by government forces and used primarily against civilians. During the reporting period, government forces further used chemical weapons against civilians in the town of Khan Shaykhun, in Al-Latamneh, located approximately 11 kilometers south of Khan Shaykhun, and in eastern Ghouta”

These attacks constitute clear violations of international humanitarian law and the Convention on Chemical Weapons, the report notes, which the Syrian Arab Republic ratified in 2013 following a previous Sarin gas attack. The report acknowledges a clear and significant breach of UN Security Council Resolution 2118 on the transfer, use and manufacture of chemical weapons in Syria, whereas Article 21 of the Security Council resolution stipulates that the council would impose measures under Chapter VII of the Charter of the United Nations in the event of non-compliance by Syria with this resolution. We remind of the importance of extending the mandate of the Organization for the Prohibition of Chemical Weapons (OPCW) United Nations (UN) Joint Investigative Mechanism (JIM) towards supporting further the conclusions of the specific incident of Khan Sheikhoun to identify the perpetrators responsible for the attack
Since 2012, the Syrian Government has consistently denied access to Syria to the CoI and independent human rights organizations, and failed to uphold its responsibility to protect its civilians. Until now, the international community has failed not only to protect the Syrian population but also to ensure full-fledged support to coordinated mechanisms of accountability as the UN International, Impartial and Independent Mechanism (IIIM) with a future view to achieving legal actions towards brining justice and peace to the Syrian community. The inability to fight against impunity in Syria contributes to the repetition and increase of human rights violations perpetrated by all parties to the conflict in the country and the region.

We, therefore, call on support towards the following:

To Permanent Representatives of Member and Observer States of the UN Human Rights Council:

– Urge States not to allow their respective countries to be safe havens for anyone responsible or supporting directly or indirectly the crimes committed in Syria, be it an individual or a commercial entity.

To members of UN Security Council:

– Urge States to comply with their obligations under international law through the opening of national judicial investigations into those suspected of war crimes and crimes against humanity in Syria; to prosecute, and extradite any individuals implicated in such crimes that are present on their territory under the principle of personal or universal jurisdiction.

– Encourage States to ensure the availability of legal procedures for victims of crimes to seek effective remedies and reparations.

– Encourage efforts to promote accountability, including by actively supporting OPCW-UN JIM and the International, Impartial and Independent Mechanism (IIIM), in accordance with General Assembly resolution 71/248.

– In view of the blockage towards the referral of the situation in Syria to the International Criminal Court (ICC), encourage prioritizing the discussions towards the creation of an international ad hoc tribunal for Syria in the upcoming General Assembly meeting.