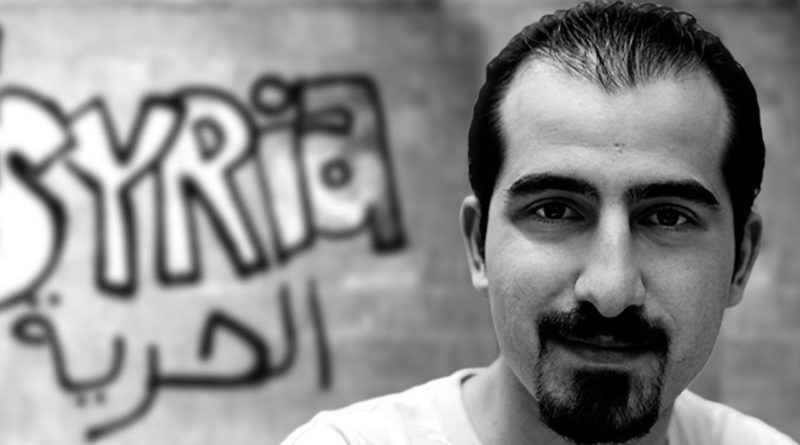 Bassel Khartabil Safadi… Victim of the Military Field Court
The organisations and institutions signing below are extremely saddened by the news that our friend and colleague Bassel Khartabil Safadi has been executed in the Syrian regime jails. We send our deepest condolences to his family, friends and all those who knew and loved him.
Bassel is a Palestinian Syrian computer engineer who worked as an an open source software programmer while using his technical expertise to reinforce freedom of expression and access to information through the internet. He also headed the Creative Commons’ Syrian project and was known as a teacher, Wikipedia contributor, and free culture advocate.
The news on the death of Bassel was announced by his wife, lawyer and activist Noura Ghazi Safadi on 01 August 2017; she wrote in a facebook post: “Words are difficult to come by while I am about to announce, on behalf of Bassel’s family and mine, the confirmation of the death sentence and execution of my husband Bassel Khartabil Safadi. He was executed just days after he was taken from Adra prison in October 2015. This is the end that suits a hero like him.”
On 15 March of 2012, Syrian regime’s intelligence arrested Bassel, where he was kept detained and isolated from the outside world for 8 months in military intelligence prison in Kafersoseh. He was later transferred to Seidnaya prison where he was subjected to three weeks of various kinds of torture by prison officials, according to what he told his family later. His family did not receive any information from the officials about his whereabouts or the reason for his arrest until 24 December 2012, when the authorities transferred him to ‘Adra Central Prison’.
In there, he finally gained access to see his wife and family, and the situation remained the same until October 2015, when all communications between Bassel and the outside world ceased. Different reports claimed that security forces transferred Bassel from his cell in Adra prison to an unknown location. It was reported later that the military field court had sentenced Bassel Khartabil Safadi to death.
Since his arrest and over the past several years, a variety of human rights groups called for Bassel’s release. Amnesty International launched a campaign to grant Bassel access to his family, a lawyer, and medical attention; former Secretary of State John Kerry called him a “prisoner of conscience” on International Human Rights Day in 2015, and the Creative Commons Board of Directors called for Bassel’s immediate and safe release in a resolution at its most recent meeting. In 2012, Foreign Policy named Khartabil one of its Top 100 Global Thinkers of 2012 “for insisting, against all odds, on a peaceful Syrian revolution.” In March 2013, Index on Censorship awarded Bassel the 2013 Digital Freedom Award for his work using technology to promote an open and free Internet.
Following his disappearance, the MIT Media Lab offered Bassel a research scientist position in the Media Lab’s Center for Civic Media, and in November 2015 Bassel was offered by the Creative Commons board a position as a Digital Cultural Preservation Fellow.
Bassel’s numerous and impactful contributions to science and society will remain a witness to the importance of his work and the sacrifices he made to make the world a better place for us.
Believing in the enormity of the loss we are experiencing with the departure of Bassel, and the importance of seeking justice for all oppressed, even if after a while, we the signatories, and while we hold the Syrian authorities fully responsible, we call on the international community and the international human rights bodies to pressure the Syrian authorities and their allies to:
• Halt the execution of all death sentences in Syria, in particular those issued by the Military Field Court and the Terrorism Tribunal
• Immediately disclose the circumstances of Bassel’s death and to open an investigation into the case, with emphasis on the fact that the court did not meet the requirements of fair trials, and to hand over his body to his family.
• Disclose the names of all those who were executed as a result of sentences by the Military Field Court and handing over their bodies to their relatives.
• Ensure fair, public and impartial trials for all detainees in Syria
• Hold all responsible personnels accountable for extrajudicial executions on the basis of mock trials
• Release all prisoners of conscience in Syria immediately and unconditionally
• Allow relevant international organizations to visit prisons and places of detention in Syria.