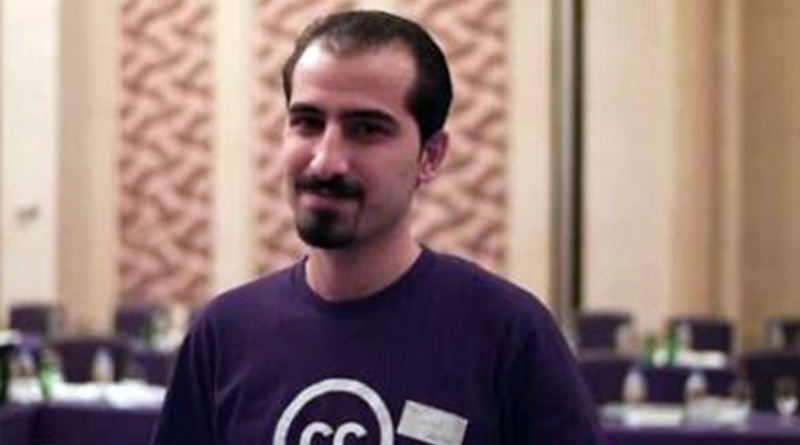 The family of Bassel Khartabil, a Syrian-Palestinian software engineer and free speech activist, confirmed that he had been subjected to an extrajudicial execution in October 2015. The undersigned human rights organisations condemn the extrajudicial execution of Khartabil and call for an investigation into the circumstances surrounding his death.
On 1 August 2017, Noura Ghazi Safadi, Khartabil’s wife, announced on Facebook that her husband has been killed. She wrote: “Words are difficult to come by while I am about to announce, on behalf of Bassel’s family and mine, the confirmation of the death sentence and execution of my husband Bassel Khartabil Safadi. He was executed just days after he was taken from Adra prison in October 2015. This is the end that suits a hero like him.”
On 15 March 2012, Military Intelligence arrested Bassel Khartabil and held incommunicado for eight months before moving him to Adra prison in Damascus in December 2012. During this time he was subjected to torture and other ill-treatment. He remained in Adra prison until 3 October 2015, when he managed to inform his family that he was being transferred to an undisclosed location. That was the last time his family heard from him.
His family subsequently received unconfirmed information that he may have been transferred to the military-run field court inside the Military Police base in Qaboun in Damascus. These courts are notorious for conducting closed-door proceedings that do not meet minimum international standards for a fair trial.
Before his arrest, Bassel Khartabil used his technical expertise to help advance freedom of speech and access to information via the internet. He has won many awards, including the 2013 Index on Censorship Digital Freedom Award for using technology to promote an open and free internet, and was named one of Foreign Policy magazine’s Top 100 Global Thinkers of 2012 “for insisting, against all odds, on a peaceful Syrian revolution.”
Since his detention, human rights groups at a national, regional and international level campaigned for his immediate and unconditional release. On 21 April 2015, the United Nations Working Group on Arbitrary Detention declared his detention a violation of the International Covenant on Civil and Political Rights, and called for his release, yet the Syrian authorities still refused to free him.
The signatory organizations express the deepest sorrow at the death of Bassel Khartabil and believe that his arrest and subsequent execution are a direct result of his human rights work and his efforts to promote freedom of speech and access to information.
We urge the Syrian authorities to:

· Immediately disclose the circumstances of the execution of Bassel Khartabil;
· End extrajudicial executions, enforced disappearance, arbitrary arrests, and torture and other ill-treatment;
· Release all detainees in Syria held for peacefully exercising their legitimate rights to freedom of expression and association.