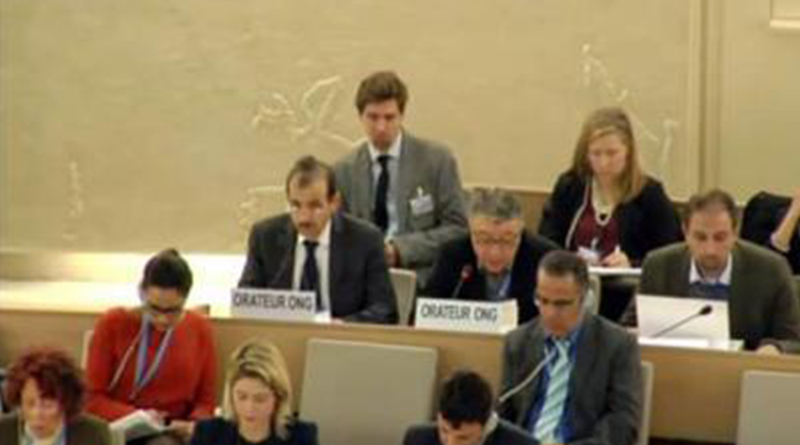 Thank you Mr. President,
The Cairo Institute for Human Rights Studies (CIHRS) in cooperation with the Euro-Mediterranean Human Rights Network (EMHRN), the International Federation for Human Rights (FIDH) and their Syrian partners commend the report of the COI and the extensive efforts deployed by the Commission to reveal grave violations and international crimes perpetrated in Syria.
As Syria marks the fourth anniversary of the peaceful protests demanding democratic reforms, the country has descended into a tremendously violent military conflict which resulted in mass destruction, suffering, and unprecedented displacement of population.
Our organizations are appalled by the failure of the international community to address impunity and protect civilians in Syria.
The Syrian government continues to undertake a systematic policy of indiscriminate and disproportionate attacks on civilian-populated areas, such as Aleppo, Deraa and Damascus suburbs, causing immense casualties amongst the population. The repeated use by governmental forces of internationally banned weapons, including barrel bombs, cluster weapons, and toxic gas, as well as the combined use of long-lasting military sieges and air strike attacks against entire communities constitute a blatant violation of international law, and more specifically Security Council resolution 2139.
Extremist armed groups which emerged in the country over the last two years have dramatically undermined basic freedoms in the regions they have taken over by imposing a strict interpretation of Islamic Sharia. The so called Islamic State has carried out public executions, forced displacements of populations on basis of their ethnic or religious belonging, have destroyed places of worship and committed other atrocities aimed at insinuating fear in the population.
Thousands of civilians, including peaceful activists, remain arbitrarily detained by the Syrian government and subjected to extreme forms of torture. Civilians are also increasingly exposed to abduction from armed groups, such as the 235 Christian Assyrians recently kidnapped by the IS in Hasakeh and human rights defender Razan Zaitouneh and her colleagues.
Mister President,
The multiplicity of perpetrators of international crimes in Syria should not result in the international community turning a blind eye on the persistent violations committed by the Syrian government and other actors against civilians.
We call on the COI to increase its efforts aimed at protecting civilians by releasing a list of names of victims it has documented, in particular victims of enforced disappearances.
While reiterating our call to the Council to firmly call upon the Security Council to refer Syria to the International Criminal Court, our organizations encourage states to apply universal jurisdiction to investigate cases of alleged perpetrators of international crimes in Syria in order to break away from the prevailing cycle of impunity looming over the Syrian crisis.
Chairman of the Commission: Last September you committed the COI to addressing the situation of Human Rights Defenders in the report presented to this session. Why has this not been done? And how can civil society assist the COI to bring attention and increase protection for rights defenders and other victims in the county?