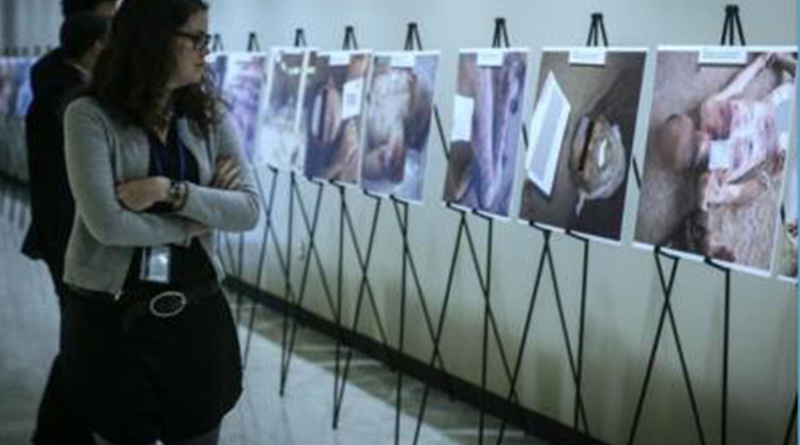 THE INTERNATIONAL MECHANISM OF EVIDENCE COLLECTING CONCERNING THE CRIMES COMMITTED IN SYRIA
AN APPROACH BETWEEN EXPECTATIONS & REALITY
STUDY
by Lawyer Reem Alkasirir
This study includes a research discussing new mechanisms
Introduction: about Syrian circumstances and crimes committed in Syria
1- The conditions and motives behind passing the resolution and launching the mechanism
2- International resolution content
3- Structure, powers, and competence
4- Expected advantages of the new mechanism
5- Challenges related to mechanism
6- Conclusion

1- Introduction
Six years have passed since Syrian public protests started, which have been faced down by Syrian regime by unjustified violence, and illegal arrests. Violations and crimes have developed into killing and devastation when the regime used heavy weaponry, explosive barrels, killing under torture, siege, forced starving and displacement. Moreover, the regime has used internationally-prohibited weapons such as chemical weapons. As events have developed without any serious interference by international community to stop such violations and crimes which are defined by the international criminal court as war crimes, crimes against humanity, forced displacement, genocide, and/or sexual-violence crimes; armed paramilitary groups have been formed from both battling parties to control certain parts in Syria. Similarly, such groups have perpetrated crimes and violations as well against the civilians.
Therefore, human rights council (HRC) has founded the independent international investigation committee on Syria during the its 17th special session. This committee has been formed to investigate all alleged violations by the international law of human rights starting from March 2011 in the Syrian Arab Republic.
The committee has been formed as well to study the facts and circumstances that might be listed under such violations, along with investigating the crimes that have been committed, whenever committee officials are allowed to define and spot such crimes, in order to make sure that such violations perpetrators, including the violations that might be considered as crimes against humanity, would be held accountable for such crimes.
The committee has collected confirmed evidence about horrible crimes committed in Syria, that might be listed under crimes against humanity. About such crimes; the committee has prepared seventeenth reports.
Unanimously, Security Council has adopted resolution No. 2235 about forming a joint investigation committee for one year, that might be renewed, in order to investigate the attacks in which chemical weapons have been used in Syria. The committee has been authorized to define individuals, commissions, groups, and/or governments that are suspected to be involved, being responsible for, have committed, and/or participated in using chemical weapons in Syria, including chlorine gas or whatsoever other poisonous chemical weapons. The committee has conducted an investigation about using chemical weaponry in Syria between 2014 and 2015. Reports have been delivered by the committee to UN security council. Joint reports between UN and organization for prohibition of chemical weapons have confirmed the fact that the Syrian army of the regime has been involved in waging a poisonous gas attack against Qamnis, a village near Idlib province in 2015. Another report mentioned that the Syrian regime forces are responsible for two chemical attacks at two spots, the first is in Idlib countryside (in the north of Syria), during April 2014, and March 2015. Additionally, ISIS is responsible for using chemical weapons in Aleppo countryside on 21st August 2016.
2- Circumstances and motives behind passing the resolution and launching the mechanism
After three failing attempts at Security Council to refer the file of the crimes committed in Syria to the international criminal court due to the veto used by Russia and China to prevent such a file to be referred to this court; the international community has reached a dead end considering establishing justice in Syria or prosecuting the criminals who are responsible of perpetrating such crimes and violations.
This resolution has been passed due to the grave crimes and violations of humanitarian international law, along with horrible encroachments of human rights law and impunity as far as these crimes are concerned. Most crimes have been committed during conflict period, and this creates a good environment for more crimes and violations to be committed. Such practices cannot be accepted by the international community as far as what happens in Syria is concerned.
Moreover, due to the recurrent pressures practiced on the security council by the secretary general and high commissioner for human rights of the security council to refer the Syrian file to the international criminal court, and with the security council failure to take any action to stop such crimes and violations and to hold the perpetrators as accountable for such crimes; UN general assembly has adopted on Thursday 12th December 2016 a significant resolution including creating an international neutral independent mechanism to investigate and prosecute the perpetrators of crimes committed in Syria since March 2011, in order to collect, support, save and analyze evidence about these crimes.
It’s worth mentioning here that the resolution has been voted for by 105 member states, with 15 objections and 52 abstained.

4- Structure, Authorities & competences
Creating this mechanism is a precedent, since UN general assembly has never taken such a procedure before. Despite the fact that security council and human rights council have already formed investigation committees, yet such a mechanism is totally different from other investigation committees’ activities, because it has been formed by the highest international organization, and it has been formed not only to investigate, but also to thoroughly prepare files to facilitate things for the working team to achieve the mechanism goals, and how to deal with them, along with finding out the competences, roles and functions of this mechanism as far as the Syrian case in concerned as well as the prosecutions related to this mechanism. Therefore, we can describe such a mechanism as a legal process aiming to collect, support, save, analyze evidence so that they can serve as a means to condemn the perpetrators of documented crimes. This procedure can be done by preparing files and being ready to file lawsuits regarding war crimes in Syria, as well as human rights violations that have been committed during conflict time. This mechanism would be applied neutrally and independently to serve as a tool for investigating and prosecuting those who are responsible of the crimes committed in Syria.
1- Mechanism Process
The resolution has not been clear concerning how the mechanism should be applied, or what roles to be assumed by it. The resolution has asked all conflict countries and parties along with civil society groups to provide any information or documents to the team in order to facilitate such a task. It showed that the team would prepare files in order to facilitate and accelerate fair independent criminal procedures that go in line with international law standards at national, regional, and/or international courts or arbitration commissions that would or might be given a judicial power to consider such crimes in the future. Clearly, the mechanism shall be applied on two significant levels including:
a- Collecting, saving, and analyzing evidence about human rights violations and transgressions to help save them from any loss.
b- Preparing files to facilitate and accelerate fair independent criminal procedures that go in line with international law standards at national, regional and/or international courts, or special courts that should consider these crimes whether now or in the future.
However, the resolution has never defined whether the investigation committee would investigate such crimes to reach certain accusations against criminals or to only collect and save evidence. I think since evidence analysis and file preparation tasks have been added; this means that the committee should at least investigate the authenticity and correctness of evidence and make sure of them in order to reach certain results concerning the criminals, and this would help it to be able to prepare judicial files, and consequently, to carry out additional investigations.
2- Mechanism Competences
Article No. 5 mentions that the secretary general should assign the competences of the neutral independent international mechanism within 20 working days, starting from the date of passing this resolution. He must depend on UN high commissioner for human rights to do this. This action would help start with preparing mechanism process and activating it in coordination with the independent international investigation committee that has been formed for Syria, and to benefit from this committee’s capabilities and experiences in order to take the following procedures:
a- Providing finance for the mechanism through donations and by UN member states.
b- Assigning qualified independent employees who enjoy good experiences and qualifications
c- Organizing the processes of data collecting, saving, exchanging in a way that makes sure all of them are kept as confidential and top secret in order to protect various information sources.
d- Asking all conflict states and parties, in addition to the international community to thoroughly cooperate with the mechanism, and to provide any information or documents they have about crimes committed in Syria.
e- Preparing clear detailed files according to international standards in order to prosecute the perpetrators of these crimes
f- Adopting the principle of transparency and neutrality in activating the mechanism and its fulfilling the duties and tasks, along with sending files to UN general assembly to make sure that a joint interaction at work has been created between organizations, civil society members and crime victims.
Because the mechanism is new and has been activated lately; the perceptions about starting the work have not been assumed their final shape, whether at the level of preparations or commencement. Therefore, the formation of this mechanism has been discussed, and the secretary general has assigned human rights council official to start creating the administrative structure of mechanism process, as well as creating rules for its activation. So far, many meetings and conferences have been held with concerned organizations and states, along with Syrian organizations to help formulate such a structure and process ways and methods, so we hope our study might make a difference as an additional effort to support such a process.

5-Finally:
What is new in this mechanism? What is the legal humanitarian message that might serve human community as a whole and Syrian case in particular?
Depending on this study; we can tell that there is a kind of advance in UN response to open new windows for justice to be established. The message of hope regarding establishing justice and condemnations would not be subject to the political interests of other countries. Actually, this mechanism is a precedent that is, when it is activated seriously and bravely, especially in confronting war crimes perpetrators, would absolutely affect the development of international law, because laws would develop depending on the progress of considered precedents, and would affect international community efforts to find solutions and tools other than those already utilized and previously formed or available which weren’t used due to political complexities.
Therefore, we can discuss that creating this mechanism is a new victory in the process of establishing justice, not only in Syria, but also as far as international laws are concerned. We hope that this step would address a clear message to prevent other crimes in other places to happen in order to preserve people’s lives away from criminals. In fact, it would create a milestone, since it would show everyone in this world that the policy of impunity is about to be terminated once and for all.