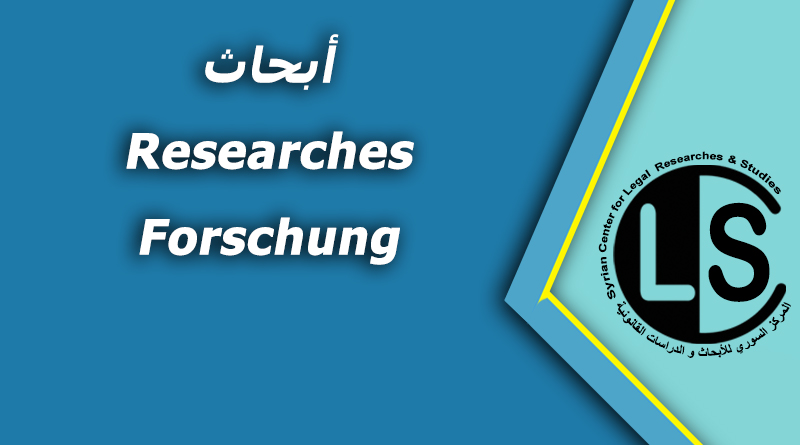 The Terrorism Of Courts In Syria
(The Court of Terror, Military Field Courts, Courts and Islamic Legitimate Bodies)

In spite of both of the high state security court and the field military courts, haven’t treated more than some thousands of issues for the all length of their existence for 40 years; the court of terror have judged ten thousands of the issues for the three years of its existence.
The field military courts treat more than 25,000 files, that more than 40,000 accused are judged, a half of them are attained and another half are escapers or prosecuted.
The accusations are ranged between betrayal, deserting, spying, communication with enemy and other crimes that related to the foreign and internal security of the state in addition to the law of the military penalty.

Whereby each issue can be accusing of one or more persons, and sometimes the accusation file includes tens of persons, so it is not possible to determine the number of detainees for the court of terror or the number of whose issues were submitted to it exactly. Because of the difficulty to reach to the documents of the court, but the estimated numbers of the detainees since the beginning of the protests on 2011 passed 300, 000 by our following the work of it and from the detainees information. Half of them, their files have been submitted to the court of terror or the military court or the field military courts, and all of them are exclusives. In addition to 100,000 ones of them are escaping and wanted for arresting.
The number of the accused persons whose files have been submitted in front of the court of terror passes 100,000. There are more than 50,000 ones of them have been accused in absentia, and the others have been detained in Adra’ prison or Sydnaya military prison or the other prisons in the Syrian provinces: Homs, Hama, Latakia, Sweida, Tartous and Aleppo. And 20, 000 ones have been released by the investigating judges for not approving the accusations, by appeasements, exchanging or because of the issued amnesty creeds.
In addition to more than 20,000 arrested ones, the field military courts judge them, and 150,000 ones that they still absent and disappeared people forcibly in the different security departments, and the unofficial arresting centers without submitting them to the courts.
The death cases in the custodies because of the torturing and the non-humanity conditions they suffer, and because of absence of all the types of the medical care. In addition to death from hungriness, we can estimate the number of who have been died in the custodies more than 50.000 because of these conditions.
The side of accusing The total number of the accused ones in front of the court The total number of the detainees since 2011 The number of the detainees that are released The number of the detainees that still under detention till now
The court of terror 100,000 50.000 20,000 30,000
Field military court 40,000 20,000 —- 20,000
total 140,000 70,000 20,000 50,000

Conclusion:
The law and courts have been founded not as a tool to achieve the justice in the society in Syria, but to oppress the society and terrorize it, and to shut up every opposite voice. The existence of exclusive courts and laws, changing the laws of judicial authority, controlling the high judgment council, and forming the exclusive courts since Ba’ath seizing upon the authority, which weren’t exist before, and they developed later to cover all the crimes that happened against the right of Syrian people. The opposition that has seized upon Syrian terrains used the same mechanism of the regime, through courts, judgment and unclear laws, which everyone can interpret them by his mood, in order to support his rule, using the justice with mutilated shapes to pose strange ideas from the Syrian people.
That happened because the opposition troops’ late to make any serious step to root real justice institutions on the ground, and because of absence of a real support to this step from the international community, and because of non-existing any effective power in the reality can protect this step. Especially, such “powers” are the goal of each other forces of regime and oppositions to weaken them. All these reasons fail each step in this field.
In fact as it is said (the justice is the foundation of ruling), it is not possible to build any political authority in Syria at future before building real justice institutions, adopting the principles of the human rights in their job as: independency, neutralism and integrity. And it is impossible to build like that authority before achieving real justice toward criminals, violators upon the human rights and users the judgment and justice to perform their own aims in Syria.