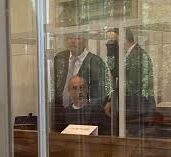 Today, Thursday, 13.01.2022, the Higher Regional Court in Kobelnz, Germany announced its verdict against Anwar Raslan, and sentenced him to jail to life imprisonment.

Anwar Raslan served as a brigadier general in the State Security Department. In 2011 he became the head of the investigation department at the Internal State Security Branch (Branch 251 known as al-Khatib branch), the most dangerous, powerful, and influential branch in Syria. He held that position until he left Syria at the end of 2012.

Based on an arrest warrant issued by the German Public Prosecutor for International Crimes, Anwar Raslan was arrested on 09.02.2019 by the German police. State prosecution charged him with accounts of torture of more than four thousand detainees, causing the death of 58 detainees under torture, in addition to other charges related to rape and sexual violence.

On 23.04.2021, the public trial started at the Koblenz Court in North Rhine, Germany. Within 21 months, 29 plaintiffs and victims testified before the court, in addition to many experts, police officers and witnesses from the defense side.

The Syrian Center for Legal Studies and Research welcomes the court’s decision and considers it historical and a milestone in the history of the German judiciary system, as well as the history of global justice.

This decision is historic because it convicts a high-ranking officer of crimes against humanity within the context of ongoing crimes, committed by the authoritarian regime in Syria, in a systematic and widespread manner, with the participation of all its security, military, political and media figures.

The decision is considered historic as it is the first to condemn criminals belonging to a regime that still exists, is still in power, and continues to commit the same crimes daily.

The decision is historic because for the first time, justice measures are precedent to any solution, started while the crimes are still happening, and are not controlled, curtailed, or abolished by politicians.

The decision is historic because, for the first-time, justice begins with the request and the efforts of victims and civil society, and with a response from an independent judiciary body, without the intervention of states or the international community.

The verdict is indeed against one one person. However, the grounds for indictment, the demands of public prosecution, the pleadings of the prosecution attorney, and even the arguments of the defense attorney of Anwar Raslan and the final verdict have all gone beyond Raslan and condemned the entire regime. A regime that has ruled Syria with iron, fear, and terrorism for more than fifty years.

It was as if the entire regime, with all its pillars and personalities, including its head, were present as the defendants, and was then condemned in all court sessions; it was also present in the indictment, in the verdict, in the testimonies of witnesses, victims and experts, and even in the defendant’s last pleading. It was also present by threatening witnesses and launching campaigns against them and threatening their families in Syria.

The decision made today, more than ten years after the Syrian tragedy  startred is a message of hope to the victims. With persistence and perseverance, efforts to achieve justice can have results. It is also a clear message to everyone, the reintegrating this regime into the international community once again, would be a reintegration of perpetrators of war crimes, who have been convicted of crimes against humanity by a judicial court.

It is a clear affirmation that there will be no stability for Syria and that no solutions could succeed without justice. it also a confirmation that criminals involved in crimes against humanity cannot be part of any solution and they can’t have any role in the future of our country.

The decision to sentence Anwar Raslan is a message to all the criminals who continue to commit the most heinous crimes in Syria, and to inform them that the time of impunity is over, and that there is no safe place for them in the world to find refuge.

It is also a message to all the accomplices who facilitated and assisted criminals in committing their crimes that they are not immune from punishment, and they will not find an excuse to get away with the consequences of the crimes that they facilitated, supported, or incited to commit.

We at the Syrian Center for Legal Studies and Research bow with great respect before the heroic survivors who came forward with courage, with all the risks they took to present their testimonies before the court and demanded justice not only for themselves but for all the victims, including those who are still languishing in detention centers until today.

We also highly appreciate the great and continuous efforts made by the police units and the public prosecution units, both German and European, in prosecuting crimes against humanity and perusing their perpetrators and war criminals. We also call on their countries to support them and provide them with more human and financial resources, and we hope that their efforts will support us in accessing more justice.

We especially call on the public prosecutors in Germany, Sweden, and Norway to issue more arrest warrants with the open files they have against major criminals, including the top of the criminal hierarchy, who are still abusing Syrians in Syria by arresting, torturing, killing, besieging, and starving…

We also greatly appreciate and respect the effort and time that the court has made to investigate this case, and we affirm that we, as victims and Syrians, owe this part of justice we had to it.

We also thank the witnesses, experts, who shed light on all aspects of the crimes that were committed.

We extend our deep thanks and gratitude to our partners in the European Center for Constitutional and Human Rights (ECCHR), for their precious efforts to reach these results, and to the lawyers of victims and the civil plaintiffs.

And all thanks to the moral support provided by Syrians and international organizations and personalities, who accompanied the court’s path and supported the efforts of the victims by all possible means, and they are far more than we can enumerate.