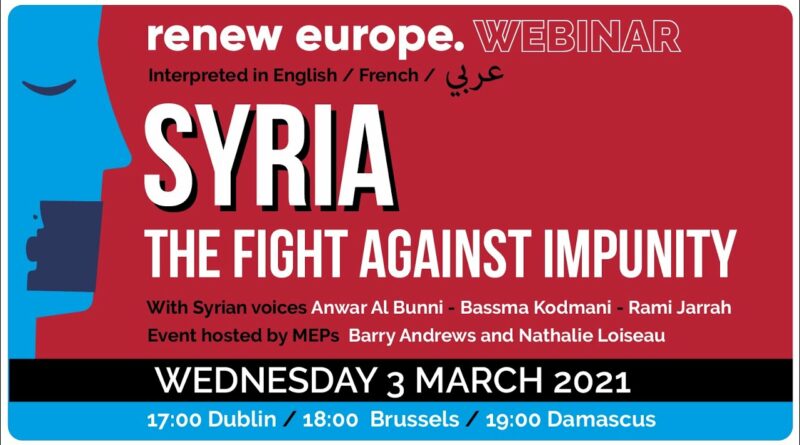 In conjunction with the European Parliament’s preparations to issue a statement marking the tenth anniversary of the Syrian revolution, the European Parliament’s Renew Europe Group, represented by Ms. Nathalie Loiseau and Mr. Barry Andrews, had organized a webinar on Wednesday 3 March on the fight against impunity in Syria. The head of the Syrian Center for Legal Studies and Research, lawyer Anwar Al-Bunni, addressed parliamentarians with the following demands:

Europe has great potential that is not being used to effectively end the “Holocaust” that the Syrian people live, so we hope that it will make greater efforts in this regard.

1- The use of the term “civil war” in Syria is offensive to all Syrians and the victims, as what’s happening in Syria is not a “civil war”, but rather a war against a whole society.

2- A unified European declaration that supports the investigations and trials taking place in European countries which adopt universal validity and adhere to its results and effects because allowing impunity for such crimes will give a green card for other regimes to threaten the lives of tens of millions of people around the world.

3- Not recognizing the legitimacy and legality of the elections that Bashar al-Assad is planning to hold, and declaring Syria a country that lacks legitimate representatives, and suspending Syria’s membership in all international bodies and in the General Assembly of the United Nations.

4- Adopting a European law to punish criminals and their supporters, similar to “Caesar” law in the United States and preventing any attempt to re-deal with criminals or rehabilitate them under any circumstances, given the testimony presented by Witness Z30 before the Court of Koblenz taking into consideration his testimony on mass graves, and the arrest warrants issued by the European judiciary.

5- Putting limitations and restrictions on the Geneva process and canceling support for it to stop giving any additional time for criminals to continue committing their horrific crimes at the expense of the lives and suffering of Syrians, and sticking to the outputs of the Geneva Declaration and Resolution 2254 only, by working on forming a transitional governing body and releasing all detainees.

6- Terrorism threatens the Syrians and the peoples of the region more than Europe, and it is not possible to fight terrorism while supporting, helping or facilitating those who create it, but rather to fight it with the support of its real opponents represented by the peaceful, civil and democratic people to build independent and free states. Therefore, we call for supporting the establishment of a Unit to monitor and track criminals from all sides and bring them to justice to protect the security of both societies.