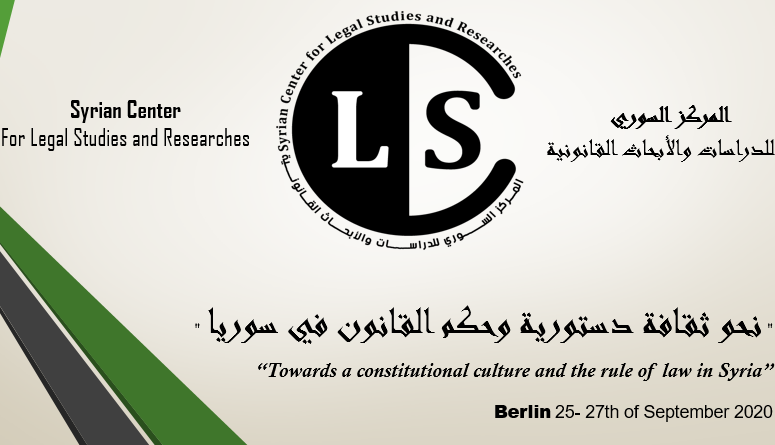 The constitution is the supreme fundamental law in any country. It determines the general framework for the life, culture, and development of any society. In Syria, as we look to a new constitution that governs our future and our future generations, we Syrians lack the constitutional legal culture that we need to determine the effectiveness and efficiency of any new constitution presented to the Syrian people in the future. We all need this culture to discuss and choose the best constitution that can bring the Syrians forward as a country, society, and civilization to the ranks of advanced democratic countries.

Under this concept and our belief that the Syrians are drafting the last modern constitution globally, we must benefit from all experiences and implement the best current constitution.

Today in Berlin, Germany, the Syrian Center for Legal Studies and Research concluded a qualitative training workshop that extended for three days under the title “Towards a constitutional culture and the rule of law in Syria.”

The workshop was attended by 24 Syrian lawyers, activists, journalists, and researchers.

The workshop opened with a speech delivered by the Center’s director, lawyer Anwar al-Bunni, defining the Center’s work in general and its mission to spread legal culture. The most important of which is the constitution and the concept of the rule of law, in particular, explaining the Center’s vision to spread the constitutional culture, which started with this workshop and its importance. This workshop considered a focus of activity in the form of a wave that extends to all Syrians through numerous other workshops, extended meetings, seminars, and films to introduce Syrians to the constitution and mechanisms of the rule of law through texts, guarantees, and protection,

After that, the representative of the German Foreign Ministry, Mr. Tropin, gave a speech in which he explained the German position on the Geneva process and the Constitutional Committee and praised the importance of this workshop for finding a path that introduces Syrians to the constitution and the rule of law

He was followed by the lawyer responsible for gender and human rights at the Syrian Center for Legal Studies and Research, expressing the importance of including gender equality in the drafting and articles of the Syrian constitution and laws and ensuring the rule of law.

After that, the workshop began its work, which included the constitution building process, its contents, chapters, drafting, systems of government, the establishment of the three powers, distribution of power between them, and their responsibilities. It detailed each chapter of the constitution and the relationship between constitution building and drafting and the rule of law, with comparative examples from many Arab and international constitutions. The workshop focused on guarantees for rights and protection mechanisms, especially the establishment, composition, and role of the Supreme Constitutional Court because of its role in securing the guarantee and protecting the rights of citizens. The Center’s vision of the best solutions for the new Syria was discussed and concluded with the necessity of completing the training manual that the Center works on to spread this culture. The training manual is one of its kind in this regard.